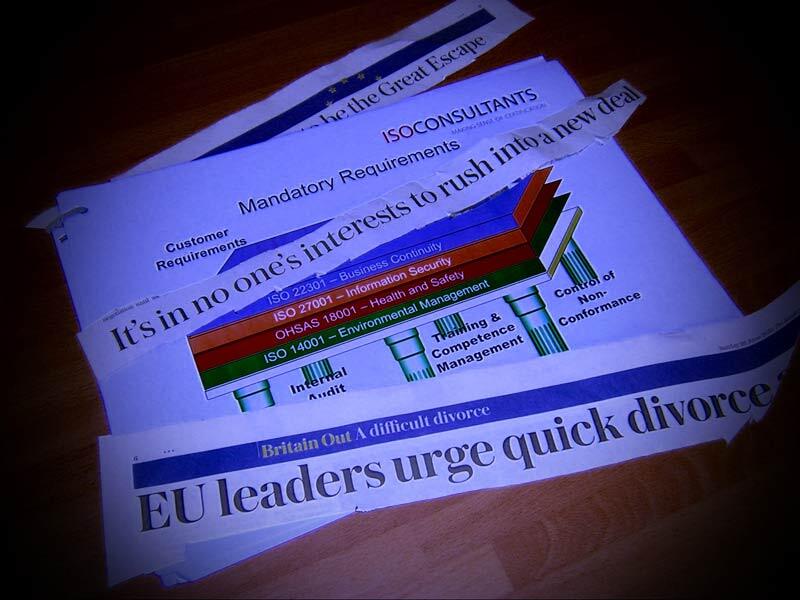 So, I thought it prudent to add some observations from the perspective of an experienced ISO Consultant

“So we’re out of the EU, can we now dump our ISO approvals ?”

Well if you don’t mind losing all your customers and going into liquidation then this shouldn’t be a problem at all. Just turn the lights off, lock the door and go fishing ( or some such pastime).

The “I” in “ISO” Stands for International

ISO Standards such as ISO 27001, ISO9001, and ISO 14001 are a powerful, long-established and globally-recognized business tool, and are unlikely to be radically amended or invalidated any time soon. The perceived “Brexit and ISO Standards” issue is actually quite local in the wider world of international trading.

I really do think it’s that simple. So, you could stop reading here if you so wished…

The “I” of ISO stands for International Standards Organisation. It isn’t European, its truly international with input from the America’s, India, China, Japan, Africa, Russia. (And occasionally Europe.)

International standards were invented to try and get global agreement. That is, what was acceptable across world business, to assist and enable International trade. Post-Brexit, if you want to trade in the UK or internationally you are still going to need your hard-won certification.

What about CE Marking?

Now, this is actually EU-Specific. The CE stands for “Conformité Européene”. This means “European Conformity”. CE marking is intended to protect consumers. It is a jolly good idea. However, some seem to think it’s more European Bureaucracy. This is one that actually works.

CE Mark is a scheme that requires a manufacturer to confirm that their products meet agreed European standards, particularly those related to safety. So for instance, an electrical appliance with a CE mark should be electrically safe while in use. You shouldn’t get electrocuted.

To import or sell goods into the 28 European countries by law you were supposed to be able to prove that they met European safety laws. There are a lot of these laws. Testing of products to confirm they conformed was a massive and expensive undertaking.

What we have to do when the effects of Brexit (eventually) come into play is unclear. However, I strongly suspect that we will continue with the CE marking scheme.  If not then we are going to have to employ another army of standards experts and write tons more BS ( – no I meant British Standards). This is usually work subsidized by the host government, so more of a drain on the UK budget. It makes complete sense to leave things just as they are.

Will large government departments be established to spend several years reinventing the wheel in respect of CE marking? I doubt it.

Continuing to use these European standards gives us a couple of advantages:-

1) We can still ship product into Europe as it meets their requirements. Trade agreements might change in due course. But basic requirements for standards of products won’t.

2) We don’t have to employ (and pay) thousands more UK government standards people to test and manage products and as we did in the distant past ( well the 80’s anyway).

And One More Time…

Let’s take a step back and reflect on what this whole ISO industry is actually about. Standards were developed to aid international working and reduce costs.

To recap, without standards, your three pin mains plug may arrive with two or four pins. The uPVC forming your windows could be uPVC.  Or it could be 5% uPVC made up to 100% with chopped up plastic bottles, wood shavings and anything else that is cheap and readily available.

Therefore, we need ethical manufacturers, and ISO Standards for them to work to, whether British, European or truly International.

Business as Usual During Alteration Works

In respect of Brexit and ISO Standards, I would suggest that it is unlikely that businesses will commit commercial suicide by discarding one piece of international cooperation.  It has a a huge benefit to trade, whether we are “in or “out”.

In short, I’d suggest “Don’t Panic – Keep Calm and Carry On.” Meanwhile, keep your standards up-to-date. (We can help.)

And if you want a more detailed discussion I’m always happy to talk. Brexit hasn’t changed that.